I recently got hold small lot of government-issue topographical maps of the Drakensberg/ Lesotho regions. These detailed maps are of no use to me, maybe somebody here has a better use for them.
These are the maps:

These maps formed part of a larger collection and can be pieced together. The paper size seems to be just over A2, the scale of each map is 1:50 000. Estimated print year is 1987. Here is a picture of one the maps: 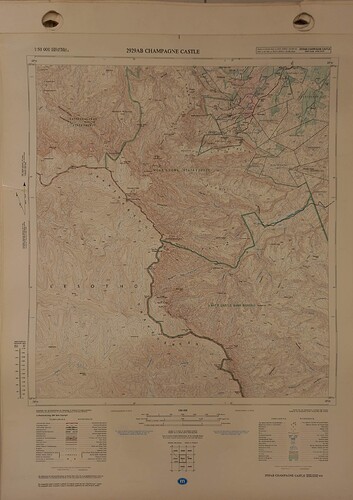 Interesting to see both Apes Pass and Old Woman Pass marked there.

When I did Ntshintshini Pass in 2020, it was the last “marked” High Berg pass on the Geoseries Maps that I needed. But I very carefully state Geoseries in that statement because of Apes Pass, which I am yet to do. I wasn’t aware that Old Woman Pass was also marked on the Government Survey Maps. I know Didima Pass is another one on the survey maps that isn’t on the Geoseries Maps.

The other aspect of referencing the Geoseries Maps is that they clearly go from Namahadi Pass to South Knuckles Pass - thus meaning I don’t have to clarify that I haven’t done all the Free State and Eastern Cape marked passes.

@Caliph
I love maps.
Where are you based?

Remember, this is mahala