In August A couple of friends and I decided hike the Tugela Gorge.
I had already been to the Falls earlier this year, so a view from the bottom would be cool, So we thought.
Early weather reports, had suggested a huge cold front was due to hit the area late on the Friday Afternoon,
early evening. Bring with it high snow falls as well as freezing temperatures.
We had based our selves at Mahai Camp, with the intention of heading out early the following day.
I had bought a Campmaster explorer dome 2 about 8 months earlier and had never used it.
I had read about it on the Campmaster site and for the price, I thought i was getting a good deal.
According to the specs the tent was a 3 season tent, 2000mm water column, Geodesic frame.

The tent Rolls up fairly compact, Less that 1/2m long and about 160mm dia, 2,7kg
set up is easy and quick ( I had it up in less than 5min, with out assistance)
It comes with fibreglass pegs and a repair kit
it looks quite neat
But that is all the good i could find
They state it is a 2 sleeper.
2 people could fit, but there would be no room for packs or anything else

At the front is a small vestibule but this really for boots or one small pack
I was on my own in the tent I had small air mattress and my pack an clothing
The weather started turning bad from around 7.30pm and a light drizzle, with a few small
snow flakes started falling.
At around 1.30am I woke up when a drop of water hit my face.
I checked where the water had come from with a torch
To my horror, the entire inside flysheet roof area had large (10-15mm) drops of water forming.
some would run down the side and out.
The drizzle hadn’t increased at all.
By 4.30 am, more drops of water where getting in different area’s along the top of the tent,
and by 5.10 I was forced to vacate, as the water had started pooling on the tent floor.
I had to seek shelter at the near by ablution building.
I Know that this is a gear review page, So apologies for not getting to the point

I just would like to see if anyone has had a similar experience, with the same tent brand, because
when made a complaint to the manufacturer, they said it was the first time it had been reported
They did a “test” on the the tent and found " no fault", the manager that I spoke to, said he used a " Garden hose for 30 min"
This how a tent company quality tests its products,
How can it make claims that the products will be able to withstand outdoor conditions, without having the means to properly simulate the conditions?
I just would like to caution, prospective hikers or campers, against considering buying this brand
and more specifically the Campmaster explorer dome 2
The Tent states that the structure allows for camping in any conditions.
In my opinion these words are untrue and deceptive.
rather check out the gear reviews on this site before making a purchase. 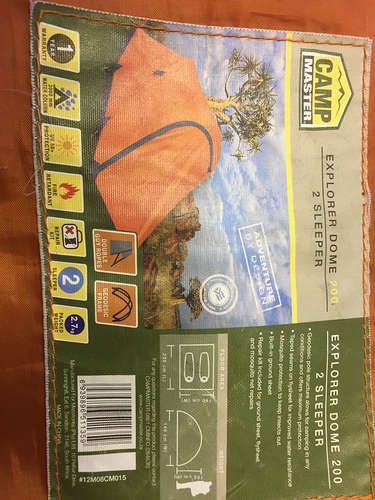 Sounds like you had a condensation problem. Looking at the photo I don’t see any obvious air-vents, and I’m assuming you had it shut tight because of the weather? What happens in that case is that the warm moist air inside the tent (coming from your breath) gets trapped, and condenses on the inside of the cold fly-sheet. The conditions you are describing sound perfect for this to have become a problem. I assume this is why the ‘garden hose test’ passed - the fly is waterproof, but the problem is with preventing condensation.

Double wall tents (a separate fly and inner) deal better with this problem than single wall/hybrid tents (only a fly, or places in which you can actually see and touch the fly from the inside). Also, good ventilation should solve this problem - so 1) ensuring the tent you buy has separate vents apart from just the door, 2) Making sure to pitch the tent so there is space between the ground and fly, allowing air circulation and 3) leaving the door as far open as you can without the rain getting in. In the right conditions, however, condensation will always occur, but it should’t be to the extent that you actually get that wet. I have a hybrid tent, and even with that the worst I’ve had is a slightly damp arm if I roll over and brush the exposed fly.

The tent is a cheapie, and so added to its seemingly poor ventilation I wouldn’t be surprised if there was some manufacturing defect that lead it to leak as well. Better luck on your next purchase!

Sorry to hear about your bad experience @dgysupafly. I think most of us have a similar story of using inappropriate gear - I went on my first winter hike in the Cederberg with a Makro-bought Born Free +10° synthetic sleeping bag… Needless to say I was an instant convert to good quality down sleeping bags.

I’m sure you’ve done your own homework after your Campmaster experience, but maybe this article sheds some more light on what to look for when buying a hiking tent: http://www.hikingsouthafrica.co.za/what-to-look-for-when-buying-a-hiking-tent/

@dgysupafly thanks for sharing your (unfortunate) experience! it is a pity to hear the tent failed since I’m always happy to see local manufacturers operating in the hiking space. personally i will stick to proven brands when going to the likes of the Drakensberg. I have had a new K-Way tent fail on me in the Drakensberg though - one of the poles literally snapped while pitching it in good weather. I’ve only had good experiences with First Ascent and E3 though.
As to why the tent leaked in a drizzle but not when hosed down completely baffles me. The only reason I can think of is that the seams weren’t properly taped, and when the flysheet is pitched properly tight the tension might have caused some leaks along the stitching. would however be very interested to hear some other plausible explanations.
ps: and agree that condensation is unlikely to cause the amount of water you described.

@dgysupafly, They did a “test” on the the tent and found " no fault", the manager that I spoke to, said he used a " Garden hose for 30 min" is the typical response from most tent factories in China. The buyer probably told the store manager that is how it is tested and the answer was just forwarded. I have heard that waterproof test from various factories in China but the odds of every single tent tested is minimal and the odds that the store manager pitched the tent and hosed it down for 30 minutes even slimmer. My advise would also be to go with a well known brand as the QC process is much stricter than the rest. The initial cash layout is quite a bit more but over the long term it is a much better investment.

Unfortunately you get what you pay for sadly ,I would recommend a vango tent any day check out rammoutaineering they’ve got a big selection. Good luck

I can second the Vango tents made in the UK. They get enough rain over there so if it is good for UK weather it should stand up to a Drakensberg downpour. I have one of the tunnel tent from Vango, 2 man tent but boy, 2 really small people, definitely not 2 of my 1,97cm size guys. Can’t even fit my wife in the tent with me, so I use it as a fairly spacious 1 man tent. At 2.2kg fairly lightweight. For serious berg weather I use a Hilleberg Nallo 3 tent. Absolutely bombproof (tested in extreme berg weather) so if I know extreme weather is expected then this is my go to tent.

For normal camping I have 3 Campmaster tents. Oldest one is about 15 years old by now, and have seen a lot of abuse over the years. Have been in lots of downpours, the worst one had the wind push the tent down so far it was touching my face occasionally, and the water was coming down horizontally at stages. No water got in. Even being 15 years old it is still waterproof. Either you purchased a dud, or their quality has recently taken a knock.

Thanks
I met up with a guy who has done, pretty much everything in hiking etc
And he sold me a tent which is not commercially
Available. In fact less than 1000 where even produced
Golbally
But this seems to be on a level with north face
And black diamond
I have yet to use it but it should be a better option