I enjoy the outdoors. In 2015 I discovered I liked walking so much that I signed up to climb Mt. Kilimanjaro. I didn’t train (I lived in a flat country), I hadn’t ever really camped before, and I had never done a hike of that distance or at that altitude.

I have since become more outdoorsy and spend most days walking, cycling, running or hiking. And now, I want to add camping to the list.

I hope to document my journey here, with an emphasis on gear.
Lets kick things off with the tent.

So after much deliberation, I settled on a tent. Those of you in the Good, Bad and Ugly tent thread would have seen that I am a little indecisive…

I bought the Naturehike P-Series 2-man tent in white.
It was between this, the Cloud Up-2, and the Mongar.

I settled on the Professional Series/P-Series after assembling a First Ascent Starlight and seeing they had a similar shape and dimensions, and the price was also attractive. Bought on special for around R1600. While I hope to camp fairly regularly, it didn’t make sense spending on something like the Mongar this early in the game.

This tent is light! My el-cheapo bathroom scale said it is 2.1kg. I should have used the kitchen scale- it would have been more accurate.

The tent arrived in a layer of bubble-wrap, paper, and plastic. It was a bit like pass-the-parcel tearing the layers off.

Once unwrapped, its white bag with blue accents was super compact and gave a feeling of minimalism.

I took it into the garden to set it up.

Set up took less than 10 minutes. The poles snap together with magnets (cool!), and they clip in easily to the plastic clips of the tent. My last tent you still had to thread the poles through the fabric sections, which invariably bunched up and caused much frustration!

The tent is light and small enough to pick up with one hand and position it to your liking.

Throwing the flysheet over was easy, and it clips in to the groundsheet at each corner. It also has two roof-top vents.

I quickly climbed in and found the interior to be quite roomy. At 1.76m I have loads of headroom when I lie down, and I can comfortably sit cross-legged and have my head clear the roof.
There are mesh storage pockets on each end, and the the vestibule has ample storage space. Should I wish to share my tent with another person, I reckon I could comfortably do so.

Now, one reason I considered the Mongar was because of the dual entrances and dual vestibules.
The P-Series showed that it also has two vestibules, but only one entrance.
So imagine my surprise when I turned around and saw another door, the same size as the entrance, that opens into the other vestibule.

And I was even more surprised when I realized hey! You can unzip that vestibule too!

It only has a single zip, so securing it with the pegs and using it for access might not be ideal, but it isn’t impossible. Whereas the main entrance has two zips.

I was so surprised I checked that I had the right tent.
Score!

All the photos on the website only show the front, and the description only says “dual vestibules for gear”.

I wasn’t too keen on the white. I would have preferred a darker green, or even the orange. But the orange was sold out, and the only other options were bright green or bright blue. I wanted the darker green so that it would blend in more with the environment, but then again, I guess orange would have stuck out as much as the white. I am sure I will get used to it.

But the white gives a clean look, with grey accents and blue rope loops to secure the tent with pegs.
When it gets dark I will see how much the inside of the tent lights up, and whether or not bystanders will see a silhouette of whoever is inside.

So far so good. I am excited to test it out, even if it is just going to be in the garden for now! 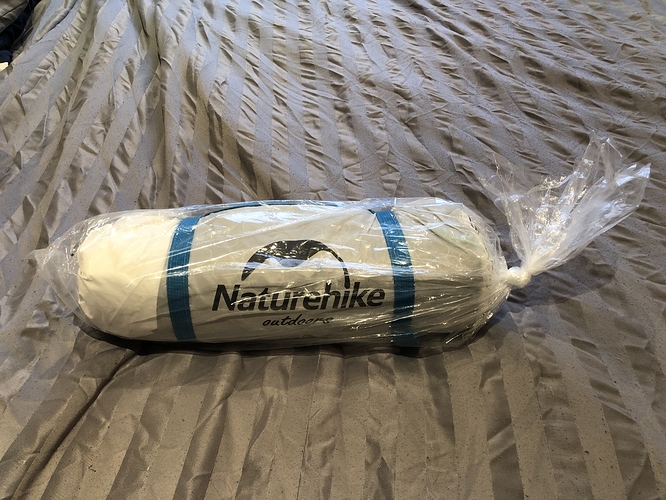 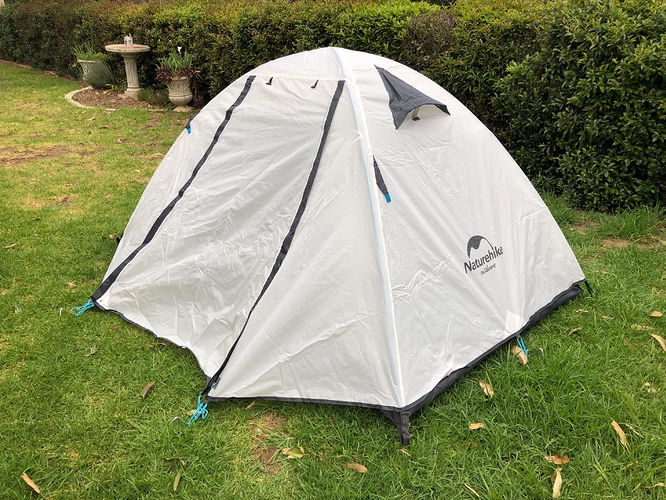 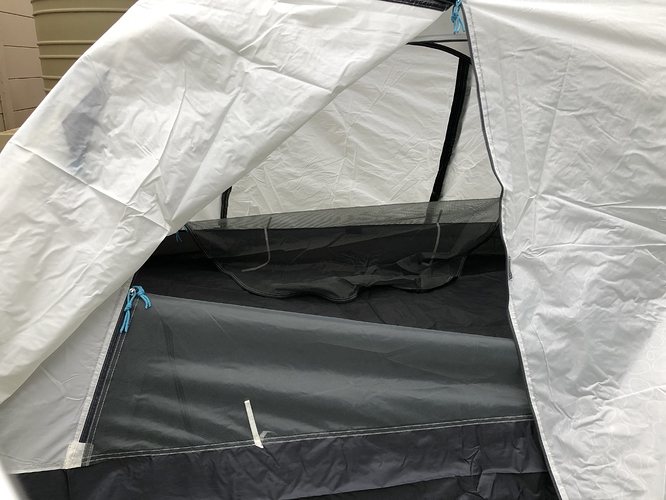 There will be a silhouette at night no matter what thickness canvas as long as theres a light inside! 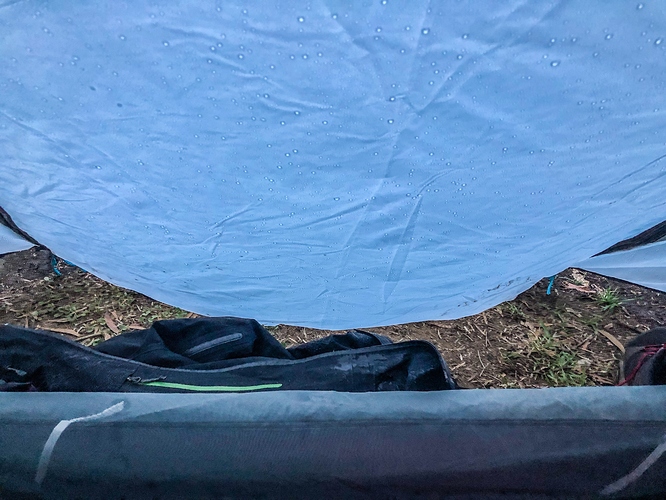 Last weekend I got to try out my tent for real.

Setup was even more of a breeze than the first time. The tent was comfortable, not too hot or cold, and I didn’t have any issues with condensation.

It rained from the early hours of the morning, for several hours, and a leak developed above the entrance.

I also hadn’t secured the vestibule with enough tension so it started to sag with the water. Lesson learnt on my part.

When I got home I inspected the tent and found where I think the leak was. The inside of the fly has a plastic-type coating over the stitching of the do-dad that holds the entrance flap in place when rolled up. The plastic coating had pulled free exposing the stitching.

I emailed Naturehike on Monday (public holiday), and had a reply by that evening. The next day they phoned and arranged a replacement tent. They didn’t have the white so I went with the blue.
It arrived on Wednesday.
Now THAT is customer service!

So I haven’t tested the replacement tent yet. Stupid, as we have had a lot of rain.
But anyway.

I went on my first overnight hike since Kilimanjaro in 2016. Only I considered this more of a “real” hike as I would be carrying my own sleeping bag and food (shelter was a hut).
We did the Alexandria Trail in the Eastern Cape.

I impressed myself by managing to pack my 35l K-Way Kilimanjaro day pack with a tiny bit of room to spare, and it weighed in at 10kg with water.
Day 2, it weighed around 11kg as I took extra water.

What did I learn…
Take two sandwiches for day 1.
An apple and a fried egg sandwich is not enough for a 20km hike.
Also, apples are better than bananas in that you don’t have to discard the skin (don’t want a banana tree popping up in the dunes!) That being said, peanut butter with mashed banana on a rice cake = winner! As is a boiled egg with a Laughing Cow cheese wedge.

I borrowed a friend’s little cooking pot which was great - light, has handles, I could pack the next day’s lunch in (rice cakes).
But, when I buy my own, I won’t get the same.
It has a ridge all the way around for the lid to sit on, and is perfect for pasta goo to get stuck.
Food also got stuck around the rivets that hold the handle.
A fellow hiker had a smooth-walled pot with a detachable handle. Much better.

I got a K-Way sleeping bag the day before as my old 360degrees one, while great, took up my whole pack and weighs about 2.5kg.
I got very sweaty in the K-Way sleeping bag, which I think is because of the type of plasticy fabric. I couldn’t go for a full down so I went for the Zermatt 950.

Overall, really enjoyed it and a good start to multi-day hikes.

Next, I need to invest in a bigger pack.

So, I finally got around to writing a report of my Alexandria Trail hike.
Unfortunately I had to compress the file to upload, so the quality is rather average.

@Sardine
I really enjoyed the thread. Thank you for sharing!
Not sure if you got a bigger pack yet, but I sure can recommend Gregory backpacks. Their service is great, and on special atm.

Happy hiking and I hope to read more soon!

Thank you so much for reading, and for your feedback

I haven’t got a pack yet. Lockdown has thrown a spanner in the budget!

Keep an eye on the classifieds here. You might just find something…and…I hate budgets. They tend to cramp the style and dreams!