If you went on an overnight hike would you pay to rent a satelite sos emergency tracker to help emergency services in the event of a serious injury, so that help can get to you quicker? If so what would you pay per night for rental rate?

Hi Byron.
Many hikers dont make use of them, but as I hike solo a lot, I have a product that I pay a monthly fee to have the option of having the ability to connect to emergency services if I need to. It costs R350 a month paid to overseas. Given that its available, I dont have to pick it up before my trip in a rent arrangement its very convenient (and my wife is a lot happier when I disappear on an adventure) For me the rental option would only be financially considered if it was available for about R100 a night.
As for emergency services finding you, its sad to note that the Wcape services are not too well trained on using a GPS point in finding you. I had to press the SOS once, and it took a while to figure out which mountain range I was in

A friend of mine did a solo Drakensberg Grand Traverse a few years ago (45h08, the second fastest recorded time and the solo speed record). What he did was he had me set up as the person who would be notified if he pressed the emergency button on his Spot. The logic being I knew what equipment he had and what he was doing, thus if he needed rescue and didn’t have phone signal, I would be able to provide more information to the rescue team than simply where he is. Naturally if he did have signal, he would call rescue himself so there would be no guesswork involved.

When calling for rescue, you want to provide the team with as much information as possible. A simply GPS co-ordinate doesn’t tell them a few crucial things:

I have never dealt with the CT Section rescue team before, but considering how much training the rescue teams do every year, I doubt they struggled to read a GPS point - I would guess they likely received the notification when they were not near their computers or maps. Its something people often forget about the rescue teams - they are all volunteers and it also takes time to go from receiving a distress call to actually putting together a team and a plan of action. They don’t just get a location and immediately get in a car - a proper action plan is required first. Not to mention that GPS signals bounce off cliffs, so the coordinate could easily be off by 500m in some cases.

I’m not on any of the rescue teams - but I look at GPS co-ordinates all the time and I know the Drakensberg very well. If someone sent me a message “emergency at 28°53’23.75"S 28°58’51.97"E”, I will also take a bit of time to figure out where they are and not know the nature of the distress. Conversely if someone says “three hikers, one broken leg just below Pins Cave”, I would immediately know exactly where they are, how to get there etc.

Two days ago marks 7 years since a rescue team had to come and pick myself and two others up off a ledge in the Drakensberg (fortunately no injuries to anything other than our egos). There was a 23h45 gap between calling for rescue and being rescued, mostly due to bad weather meaning they couldn’t helicopter in, and the call was after midday, so it was too late for them to hike in that day, especially in bad weather - there was no urgency as we had sufficient equipment to survive multiple days if required, thus we just had to wait. The fact that we have a rescue team that we don’t have to pay for here is already far ahead of a lot of other countries. This isn’t Yosemite where there is a full time rescue team who can come at a few minutes notice.

Gavin R, rescue convener of KZN Section did a really interesting talk on procedures around mountain rescue a few months ago. I think it was posted to YouTube. He also did a short writeup on what you should do on this website a few years ago: 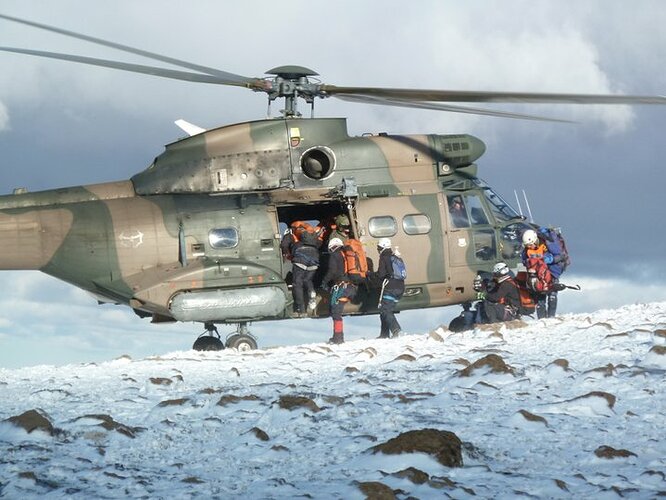 Gavin Raubenheimer gives an informative breakdown of mountain rescues in the Drakensberg, with a handy list of do's and don'ts.

Hi depending where you are hiking and if there is coverage the Namola emergency device could also assist there is a once off purchase not sure of the current price plus minus R1000 and R70pm to monitor and respond.

Same, same as with TonyGoY, since I carry my Garmin InReach 66i my wife let’s me hike any crazy mountain local and overseas without worrying (too much) also when guiding on the Rim of Africa it’s a fantastic way of getting hold of me anytime via a message system - hence if any of the hikers has a problem at home she can let me know with in minutes and we then use the SatPhone (if necessary) to call back. The units were quite costly, but have dropped to R10’000.00 with a monthly subscription (which can be suspended) of ±R300.00 Hey that’s cheap for your wife’s peace of mind, your endless adventures and possible life saver. On the WSR… yes I also had that experience that they were looking on the wrong mountain despite half an hour updates of our moving position (500m per hour with a patient in tow)… he shit happens, but at least not caused by an ignorant hiker or guide.

Just to correct the above it was METRO (!) not WSR sorry guys!

Hey Tony.
Which is that?
SPOT?

I’d be curious to know as I’m eyeing out a gadget for precisely similar reasons as you mention.

Hi Carl. I make use of SPOT. Its about R350 a month. I consider it worth the cost, as I like to solo hike, and being now in my 50’s its worth having. Also it comes with a “Its OK” button which my wife really appreciates. She then also can see exactly where I am…

Also it comes with a “Its OK” button

That’s a good innovation. There have been a number of occasions when I’ve got messages from friends wives asking me to look at the spot data to see if their husbands are ok.

Just so you know, the SPOT guys really know what they are doing. They are persistent with calling, connecting with my wife and the local emergency services, until the emergency is over. Not just once. We had to tell them to stand down, when I was safe…

They are persistent with calling, connecting with my wife and the local emergency services, until the emergency is over

This is very heartening to know. And it answers my fundamental question which ran something like:

“Well that’s great, you connect with some amazing international GEOS system but ultimately it comes down to some local outfit who may or may not be able etc etc etc”

A testament to how jaded I’ve become perhaps.

My thinking re SPOT was also that it has, as far as I can tell, 3 or 4 options for reaching out namely: OK, Message, the Two Hands and SOS. So it occurred to me that instead of simply using them as per these modes one could have one/two contacts that speak to each other (wife/brother) and you’d work on the premises that “no news is great news” but arrange, for example, that ‘OK’ means “I’m lost but OK but need help”…that ‘Message’ is for “I have minor injury send help but I’ll live”…and the Two Hands could be used for “snake bite” or something drastic. The beauty of this is the people you’d contact would be as @Ghaznavid mentions knowledgeable about you which can help.

Am I over thinking it?

It appears, if I’m getting this right, that the SOS button is plenty and that it saved your skin @tonygoy ?

Hi Carl.
No you are not overthinking it. I have a system with my wife, which pretty much is OK at different times repeated per hour, means I am benighted (if thats a word) and wont make it back when expected, but am OK. So dont call help. This gives me the freedom to park off where I am, until muscles, pain etc has subsided or mist has cleared etc so I can make my way safely home without pushing myself into danger points. Sometimes you just cannot control everything and the worst danger is thinking “I MUST cross this river now” or “I MUST climb this cliff now” There is no MUST. Sometimes you must just wait for the water to lower or the morning to come…